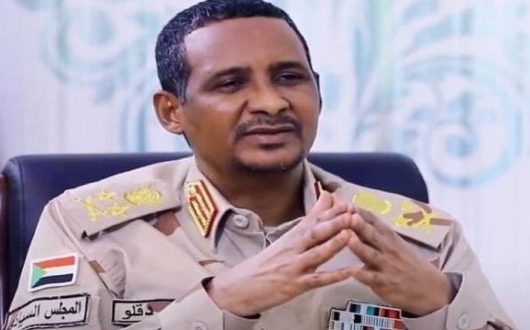 Experts: The efforts of the leader “Hemedti” restored life to the people of West Darfur – Kosh News


Experts described the efforts made by the Vice-President of the Sovereignty Council, the Supreme Commander of the Rapid Support Forces, Lieutenant-General Mohamed Hamdan Dagalo “Hemedti” in West Darfur State, as fruitful and restored normal life to the people of the state.

Among the recovery that West Darfur is witnessing these days, hygiene mechanisms provided by Commander “Hemedti” were received; It consists of a loader-tanker hood and 2 large flaps.

The acting Wali of West Darfur, Al-Tijani Al-Taher Karshoum, said during his receipt of the mechanisms, according to Al-Sayha newspaper, that the deputy head of the Sovereignty Council fulfilled his promise to the people of the state; praising his efforts in the recent reconciliations in El Geneina; He said that she found approval and acceptance by the citizens, and thanks to her the spirit of love, tolerance and peace prevailed. Calling the components of society to renounce racism, regionalism and tribalism; Supporting peaceful coexistence and upgrading the social fabric.

Kershom indicated that the state government and its security committee will not compromise in resolving the intruders and anyone who dares to violate what was agreed upon; Directing El Geneina locality to take care of the mechanisms it received and to cooperate with the Ministry of Urban Development and Infrastructure in the state to benefit from them in upgrading services.

For his part, the Commander of the Rapid Support Forces, West Darfur Sector, Colonel Muhammad Naji Obeid, said that the Rapid Support Forces, in the context of social responsibility, have continued to carry out their national duty towards the homeland and the citizen by providing humanitarian aid to support those affected by tribal conflicts and support the Holy Qur’an cells, Islamic complexes and government institutions. In addition to the security role in maintaining stability and assisting the regular forces in carrying out their duties, explaining that the reconciliations that took place in the state had a clear impact on eroding the social fabric among the various social components.

For his part, the Executive Director of El Geneina Locality, Khalil Hamed Daqarshaw, said that the locality was suffering from a lack of mechanisms and environmental sanitation aids, but it recovered thanks to the efforts of the Vice-President of the Sovereignty Council, adding that these mechanisms were a dream and now they have become a reality and in turn will contribute to the process of environmental sanitation and the opening of water drains. rain; Emphasizing their determination to move forward in achieving all that the local government can do towards the citizen; He called on the components of civil society to cooperate and adhere to the reconciliations that have been achieved in the locality so that the citizen enjoys stability and development and preserves the reconciliations that have been achieved, but rather supports them.

Experts believe that the efforts made by Commander Hemedti have borne fruit, and thanks to peace and tribal reconciliations, the people of West Darfur state have returned to normal life, and the rules of life have re-established throughout the state and its various localities.

Experts point to the regularity of the tireless commercial movement and the opening of markets that were closed in some localities due to tribal fighting in the localities of Karinak, Sirba and Jebel Moon; Everyone frequented these markets, especially merchants and sellers who wandered from market to market, which is called the “Umm Doror” trade.

Experts say that the city of El Geneina, the capital of West Darfur State, has been decorated in the most splendid ways over the past weeks to celebrate the peace and tribal reconciliations that took place thanks to the efforts of the leader “Hemedti.” The celebrations ended in El Geneina by honoring the first man of peace and tribal reconciliation, Lieutenant-General Mohamed Hamdan Dagalo “Hemedti”. In a joyful festival in which the courtyards of El Geneina Stadium were filled with attendees, folk arts teams with their diversity, cultures, customs and different traditions gathered.