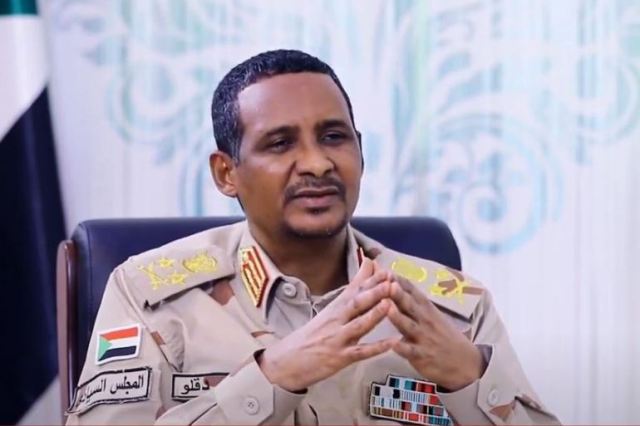 
The Vice-President of the Sovereignty Council, Lieutenant-General Mohamed Hamdan Dagalo “Hemedti”, announced a comprehensive campaign to start establishing a charitable fund to support the return of the displaced and address the humanitarian situation in West Darfur, provided that the starting point is to deposit funds deducted from the regular forces (the army, the police, the Rapid Support and the General Intelligence Service). ).

The Vice-President of the Sovereignty Council confirmed in statements on Thursday after a meeting with the Council of Ministers of West Darfur State in the presence of members of the Sovereign Council, Taher Hajar and Dr. Al-Hadi Idris, confirmed that he had held consultations with the Chairman of the Sovereign Council, Commander-in-Chief of the Armed Forces, Lieutenant General Abdel Fattah Al-Burhan, and they agreed to deduct two thousand pounds. From each officer in the army and police, while an amount of three thousand pounds is deducted from each officer in the Rapid Support Forces, while an amount of one thousand pounds is deducted from each individual in the various regular forces,

Noting, according to Al-Sayha newspaper, that the announced fund will be guarded and under safe hands and managed transparently to disburse funds according to the urgent humanitarian needs faced by the displaced in the state, the most important of which is the file of voluntary return and the provision of necessary services, and indicated that they will continue to work in the field to address all humanitarian and security imbalances, expressing his regret of the humanitarian conditions that are not worthy of the humanity experienced by the displaced who are in government institutions inside the city of El Geneina, explaining that the aim of addressing these conditions is not to empty government institutions, but rather to address the conditions of the displaced.

Hemedti issued an appeal to all Sudanese businessmen and philanthropists at home and abroad, as well as philanthropists and organizations in the world to respond to the humanitarian situation of the displaced in West Darfur. Building trust and peaceful coexistence and stopping all forms of division and diaspora in order for the agricultural season to succeed and to overcome the critical stage.

Severe water crisis in Al-Shakla neighborhood (2), and the price of water has risen – Kosh News

Britain: We are horrified by the loss of life in the June 30 protests in Sudan

Hilal Al-Abyad dissolves the technical and…

Police admit that one of its employees shot dead a…